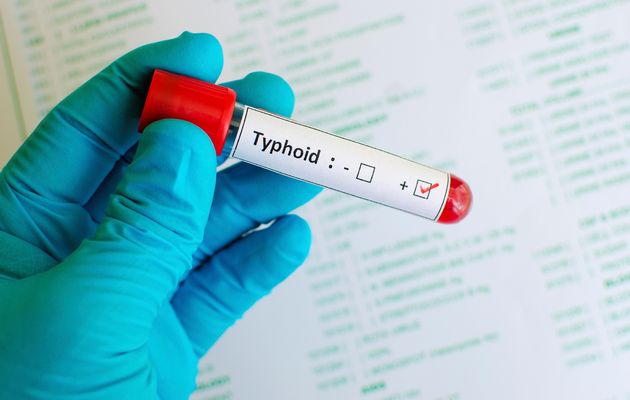 My landlord came to visit to collect the money for my last month’s electricity bill. He asked me how my illness was going.
“Oh, very good,” I said while sweating abundantly.
“What was it again?” he asked.
“Typhoid. Typhoid fever.”
And with these words he took a few steps back. “Oh. That’s not fun. Not so good. You get better soon. You can also pay next month, no problem for me.” He already opened my door. “Hey, no problem. Good night.” And he was gone.

Typhoid is a bacterial disease transmitted by the ingestion of food or water contaminated with the feces of an infected person, which contain the bacterium Salmonella Typhi. It may be spread through poor hygiene habits and public sanitation condition and sometimes by flying insects feeding on feces.

It would not have been very easy to infect my landlord…

Now how could I have gotten the bacteria in my system? Possible some infected person in my latest countries of vacation, Indonesia or Malaysia, did not wash his or her hands and prepared my food. Or that fly decided to walk about on all that previously prepared food. Food that had been waiting for customers for hours, days?

As a lover of Indonesian food I was unfortunately disgusted by pretty much half of the food that was presented in Indonesia. In Northern Sumatra it seems to be normal to sit down in a restaurant and you are presented with all the previously prepared warm food options in little bowls. Filling up the table. The entire table. Everything is cold! But when hungry, weary of travels, I eat. And I normally loved thes “rice table” style dinners, but it was tasteless. Or all tasted the same. It was dull. Cooked to dead. Where were the flavors? I even preferred the Indonesian restaurant down my street in Phnom Penh over all of that in Indonesia!

Maybe that’s where it went wrong. Eventually you pay for what bowl you had something from. I had some of that, some of this, and that yellow thing there. Totaling a massive $3.50 bill.
I totally imagined that the bacteria would be from a place like that. Hygiene is hard to find in that part of Indonesia also.

I was home again for about five days when I was a bit tired, way too early on a normal day. So I took a little nap. That became an early night. That became “I’ll sick this thing out, I should be done in a day”. Until my girlfriend said that I should see a doctor.

The doctor at the SOS Clinic in Phnom Penh immediately noticed that I was very dehydrated. In went three half a liters of electrolyte into my arm. Plus fluid pain killers. Make that two bags into my arm. Blood tests were down. A blood culture was set out for the Pasteur Institute.

Blood tests revealed no malaria, no dengue, no hiv. My white blood cell count was alarmingly low. “This can be typhoid as you have all the symptoms of typhoid fever”, the doctor said. I was okay with everything, just treat me against it and I wanted it all to be over. Tomorrow, yes?

At night I would have extrusive sweat attacks. I would be burning. Five minutes later I would get the cold shivers. As if somebody had put me on the ocean floor. Fever hit the 40’s. Paracetamol became my best friend and to ease everything I had two 500gr pills every 4 hours. Headache removed as long as I took the pain kills. Add delirium. Add a visit to the bathroom every hour. Add drinking electrolyte water (Royal D mixed with water) by the gallons. Every night.

The blood culture from the lab came back “sterile”. There was no bacterial activity to be seen for three days in row. Happy me, but according to the doctor the typhoid bacteria would be very hard to spot in a blood culture. If you take 10 blood cultures, you might spot its activity once. So the treatment against typhoid was continued.

Five days of hospital visits followed after the first one. And every day I got the antibiotics are an IV drip into my arm. And then it continued into antibiotic pills. Another five days.

After this entire routine of 10 days of antibiotics was done, the doctor wanted to see me. The bacteria seemed to have subsided. Faster than it normally does. I had felt more alive in the previous days. I had also let go of most of the paracetamol, which had created this internal harness that fully stiffed me up.

I did feel better, but felt most relieved on the first day without any medication. On the day that I did not have to take ibuprofen to stem the headache and no antibiotic pill had to be taken with breakfast.

That was when I was free again. Healthy again. Typhoid free. Slowly the battery of my body recharges back to normal conditions.