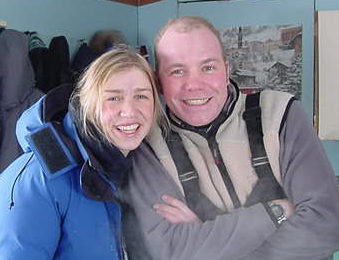 From 2001 to 2003  I traveled the world for free, thanks to my own social network www.letmestayforaday.com and the thousands of people from all over the world who invited me over through that website. In return, my compensation for free accommodation for one night, I published a daily travel diary on the website. The entire diary of over two years of traveling is still online and was published as a Dutch travel book in 2004. Below is an English translation from a chapter in this book, which became relevant after the release of the movie The Grizzlies, filmed in Kugluktuk one year after my visit in 2003.

First, some background on the location. Yellowknife is situated at the North end of the Great Slave Lake and came to being after the gold rush of 1934. Yellowknife consists of the Old Town, built on a small island, and New Town, spread out over the bare, frozen tundra’s of the North. During the long and dark winter days, the Great Slave Lake becomes a ring road for Yellowknife and people drive over the vast ice pack. After the slow decline of the gold findings, pure diamonds were found decades ago and the city quickly developed into one of the most important diamond supplier worldwide. END_OF_DOCUMENT_TOKEN_TO_BE_REPLACED