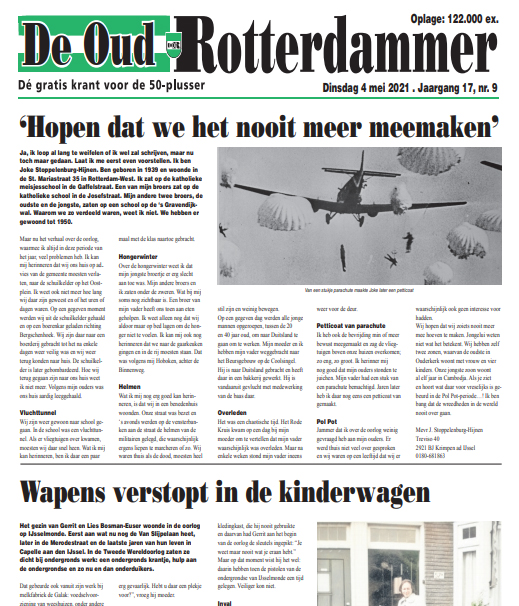 My mother was born in 1939 and survived through the World War II in Rotterdam with her entire family. At times when the country is remembering the dead and fallen on May 4 and celebrating liberation and freedom on May 5, she will always have problems with these times from the past. For the newspaper the Old Rotterdammer she wrote her story “Hope to never experience it again”.

“I can remember that we had to leave our house on the advice of the municipality, to the air-raid shelter on the East Square in Rotterdam. I don’t remember how long we’ve been there. At one moment we we were taken out of the shelter and loaded on a cart to the town of Bergschenhoek. We were brought to a farm for a few days and returned back to Rotterdam when it was safe again. The shelter had been bombed. According to my parents, our house had been emptied out nicely too.”

“One day, all men between 20 and 40 years old, had to report for the Arbeitseinsatz, to work in Germany. My mother and me brought my father to the Beursgebouw on the Coolsingel in Rotterdan. He was transferred to Germany where he had to work in a bakery. With the help of his German boss there, he managed to escape and he walked all the way back to Rotterdam. The Red Cross came to the house to tell my mum that my dad had probably died. But a few weeks later he was suddenly standing at the door.”

“I have experienced the liberation of the country more or less consciously and saw the airplanes flying over our heads, they were that big and close. My parents were cheering happily, I remember. My dad got his hands on a parachute. Years later I had made a dress from it.”

“Too bad I asked very little about the war from my parents. We didn’t talk much about that at home, or we were at an age that we were probably not interested in that either.” 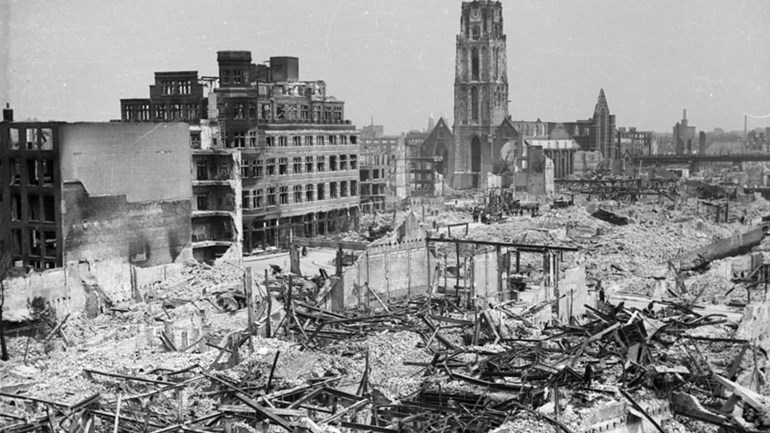 ‘Travelling by invitation?’ asked one of my lady friends. ‘Who, in his right mind, would ever want to invite you in their home?!’